September Artist of the Month-Literary 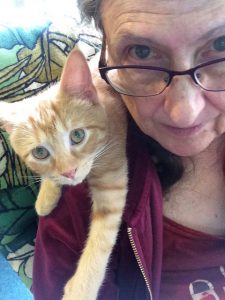 Mary Turzillo’s  poetry collection, Lovers & Killers, won the 2013 Elgin Award.  Her 1999 Nebula winner,”Mars Is No Place for Children,” is read on the International Space Station.   She has been on the British SF Association, Pushcart, Stoker, Dwarf Stars, and Rhysling ballots.   Sweet Poison, written with Marge Simon, was a Stoker finalist and won the 2015 Elgin.  Her novel Mars Girls came out in 2017 from Apex.  Bonsai Babies, a collection of literary horror, was published by Omnium Gatherum in 2016. Satan’s Sweethearts, also with Simon, won second place in the Elgins.   Her current project is A Mars Cat and his Boy.  Mary was on the US foil fencing team for Veteran World Championships in Germany, 2016. She lives in Ohio, with scientist-writer Geoffrey Landis.

Enter a chance to win one of her books! No purchase necessary. Raffle forms inside the store.