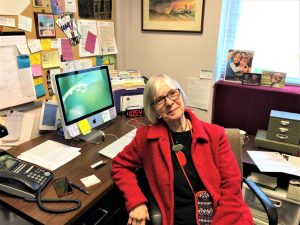 For the month of January, our musical artist of the month is Judy Ryder Frumker.

Judith Ryder is the Founding Manager of the Cleveland Arts Education Consortium with offices at Cleveland State University where she oversees all activities on behalf the Consortium’s membership. Under her leadership, Consortium membership has grown from 25 organizations and institutions to over 100 Consortium members. Ms. Ryder is the pianist and music arranger with the Red Campion ensemble, and helps coordinate a variety of concerts and education programs in Ohio and beyond along with playing for other area concert, festival and opera productions. Between 1976 and 2007, Ms. Ryder was Director of Cleveland Opera on Tour, the education and outreach wing of Cleveland Opera and recipient of numerous awards including the prestigious Ohio Governor’s Award for Arts in Education. The diverse education and outreach programs she developed in her 31 years with the company annually served 80,000 people throughout the United States. Prior to this, she was a founding member of the Thalia Piano Trio, taught piano and accompanying at the Cleveland Institute of Music and Music Settlement, and between 1982 and 1994, served as coach and keyboardist with the Robert Page Singers, a group of 38 singers that presented concerts locally and on tour. A graduate of Eastman School of Music, Ms. Ryder continues to inspire musicians and non-musicians with her work in the region. Primary Instrument: Piano