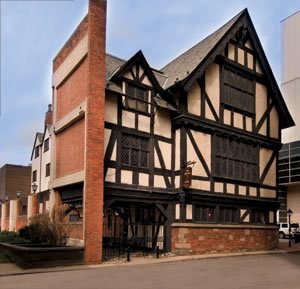 In the late 1800s, something special was happening in Cleveland: some of our local kids were so musically gifted that they were sent (by steamship!) to Europe to study at the top schools with famous teachers such as Antonin Dvorak and Johannes Brahms. In time, they returned home to become notable composers and teachers, creating the fertile ground for institutions we still enjoy—among them, the Cleveland Orchestra.

Johann Heinrich Beck, Edward Kresja, and Charles Rychlik were three of these Cleveland kids. Exactly 100 years ago, they were famous here for their playing, teaching, and also orchestral and chamber music writing. Their compositions have been stored unpublished in boxes at our Cleveland Public Library since then. Be among the first to hear their refreshing chamber works again alongside a masterpiece by their beloved teacher: Dvorak’s fabulous “American” Quartet.

If you have never seen the Hermit Club in Playhouse Square, you are in for a glorious surprise.

The Musicians and Hermits invite you to join us after the concert for beer or wine, German appetizers, and juicy stories about musical life in Cleveland between 1840 and 1920. The historic and secretive tavern directly below the Hermit Club performance hall has limited seating but unlimited Gemütlichkeit. Reserve early to mix and mingle with the musicians and guests and learn more about Cleveland’s rich and unusual musical history in a presentation given by Isabel Trautwein, Artistic Director of Heights Arts ‘Close Encounters’ concerts.

Concert tickets are available for purchase at Heights Arts, 2175 Lee Road in Cleveland Heights, via phone at 216-371-3457, or online. We are pleased to offer reduced-price tickets for students ages 8-23, thanks to generous funding from the Paul M. Angell Foundation. Students under the age of 18 must be accompanied by an adult (who also qualifies for the student ticket price).

All concert venues are wheelchair accessible. Directions for concerts at private residences are mailed a week in advance. Advance ticket purchase is necessary as seating is limited, and Close Encounters concerts have a tradition of selling out.