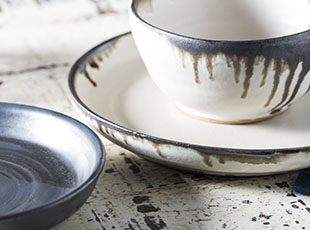 Gina DeSantis swore off clay in high school after an unsuccessful project fell apart. She went to college with the intention of earning a “practical” degree in graphic design. That quickly wore off when she saw the ceramics class working on the pottery wheel. With the help of a three-dimensional design professor, she realized she was not a 2D artist and was best at drawing with clay. Thanks to this beginning at a community college, Gina went on to earn her B.A. from Cleveland State University, then her M.F.A. in ceramics from Kent State University in 2006.

Gina established a studio in the Screw Factory/Lake Erie Building in 2008 and began organizing twice yearly open studio events for the neighboring artists. After teaching for a decade she decided to establish her own classroom across the hall in 2013. Gina wanted to create awareness of the ceramic arts through classes, workshops and open studios. As of 2015, she is joined by multiple instructors and studio assistants.

Gina’s work is sold locally through galleries, The Cleveland Flea and her studio in Lakewood, Ohio. Her work has been featured in Uncommon Goods, Cleveland Magazine, Lake Erie Living, Edible Cleveland and Midwest Living.