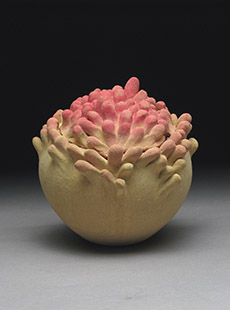 Yumiko Goto was born and raised in a suburb of Osaka, Japan. She moved to the United States in 1999 and earned an associate art degree from Martin Methodist College in Pulaski, TN. She received her BFA from the Cleveland Institute of Art in ceramics with an emphasis on Fiber, Metal and a minor in Enameling in 2004. The Cleveland Institute of Art awarded her the Helen Greene Perry Traveling scholarship, the Viktor Schrekengost Endowment Fund for Excellence in Ceramics, and the Jane Iglauer Fallon ’36 Scholarship for Excellence in Crafts. Goto received an MFA from the University of Florida where she was awarded the Graduate Alumni Fellowship and the Penland School of Craft partnership scholarship.