Creating poems and origami, Kathleen Cerveny was a hit as our last Pop-Up Poet of the summer at the Nature Center at  Shaker Lakes. 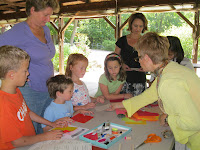 July 18, 2012                     Noble Road Library with poet Shelley Chernin
Shelley Chernin used ukelele, words cut from magazines and her own collection of books of poetry to attract library patrons to the PUP booth.   She sang (yes, in a library!) “Come write a poem with me…” an original song she wrote to engage people of all ages to create poetry.   Some people wanted to hear her read, others wanted to sit and write. It was an afternoon of words at their best!

Poet Cindy Washabaugh was our PUP poet in front of the Alma Theater at the Cain Park Arts Festival on Saturday, July 14.   Cindy worked her poetic magic as people stopped to see what words they could create and form into poems using materials Cindy brought with her.   Cavana Faithwalker was also there to lend a lens and poetic hand. The poets are using the new “Poetree” portable booth,

constructed by Ted Ferringer, P.J. Doran and Jason Radcliffe. Many thanks to them for making our Pop-Up events more portable!

Dianne Borsenik regaled passers-by with her poems and invitations to read with her or just listen on Saturday night in front of Mac’s Back’s Books on Coventry Road. Current poet laureate, Cavana Faithwalker, was there to help distribute poems and give poetic support.   People paused, applauded and were sometimes persuaded to share their own poetry.   Thanks to Dianne for her generosity and creative, energetic spirit!

Cavana Faithwalker launches Pop-Up Poetry outside of the Heights Arts gallery on Lee Road. Cavana set up in the mini-park near the gallery which was having an opening of their show, Materiality. Many people stopped to sit awhile with Cav and co-write a personal poem which he finished and e-mailed to them afterward.