Cathalyn Roberts, Founder of The Katy, is a Cleveland based songwriter, bassist & vocalist. The spirit of The Katy is expressed through energetic melodies and pulsing, driven tempos along with the purposeful lyrics addressing inequality, loneliness, adoration and struggle. Cathalyn’s songs have been featured in “Master” a Amazon Prime horror film also featured in the 2022 Sundance Film Festival, has opened for Thievery Corporation at Newport Music Hall & also toured with Grammy Award winning artist Van Hunt. 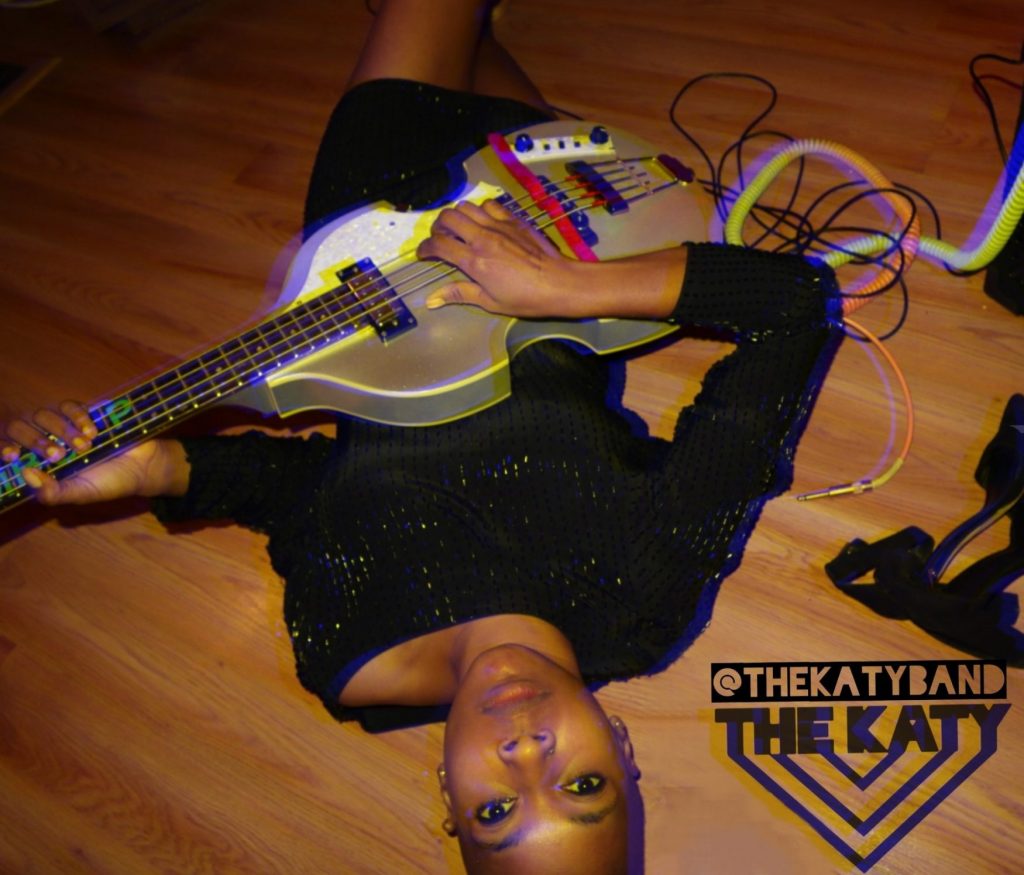 A recent interview with Cathalyn:

Q: When did you begin work on this album?
A: We’ve had previous attempts at recording this album but, we used a lot of the live studio recording January of 2020. We were still sparked up from being on tour with Van Hunt, opening for Thievery Corporation & playing more out of town the year before. Van came to Cleveland to be with us for the sessions, which was special & sureal. The songs had all been played live for a while before we recorded, so we were, ready. Here, Gone the oldest song, I wrote when I was 18. Bonnie Single was written around that time too. Before I started playing with Ashanti & Eli, I played those songs around & Its cool we have video of us playing those, our 2nd show together at Waterloo Fest 2016.Market Cornered, Camaraderie, Elbowroom & maybe another one, I’ve had demo bass lines for but, mainly finished the lyrics 2017-19.. sneaking to write poems & lyrics on scrap paper at my old gallery guard job, reacting to the things I saw happening then, trump presidency, things in the news etc.

After those January sessions, Eli recorded alot of his keyboard parts at home, synths. We re-did some of the vocals too & I did harmonies at home. It felt good to show more of what I can do with that & learning some of the editing side of that more. Some percussion too & things, we overdubbed together in a time we were thinking we’d mix ourselves. We ended up being able to work with Pete Min, an L.A based engineer who mixed the album for us.

People are FreE was fun & special to have on the album. It’s a cellphone recording that we edited, of an exercise we were doing in rehearsal one day. We switched instruments with Ashanti on Bass, Eli on keys and I was playing drums.

Bonnie Single, we sampled from a really old rehearsal recording of us, Dan Fernandez helped out with drum programing on that , him & Ashanti. I wrote most of Elbowroom all at once at my old job, thinking & walking I heard the bass line & first couple lines. started writing the lyrics thinking what would I say if I could just stop the room & say what’s on my mind. & thinking about sort of a theme for our band, like The Clash has Garage land. Elbowroom, we reworked a few times & had some recordings of from a while ago, used some live too. we recorded claps together live & Its special Ashanti & I both sing towards the end. We had Patrick Graney playing some percussion & Jake Ford did some guitar parts too for that one.
Q: What did you gain from the process & what do you hope the listener receives?
A: I learned a lot about myself through the process of the album & saw our band, friends & the world change. Good and Bad. The songs on this album meant a lot to me, like I mentioned some of them I wrote as an older teen & am seeing my perspectives change through the process of writing. Not all the songs are directly personal but, It felt like a relief to have them out in the world. I’ve been proud of us but, it’s also been difficult , as these years with the presidency, protests, police brutality & pandemic has been for the rest of the world too. A lot went into this one, I feel like its a whole story. I hope listeners hear that & I hope it can be special to them too.a lot of the songs stem from a similar lens, 2017 trump time-2020 pandemic, through my eyes as a black woman & also my own stories .market cornered is a cathartic song i wrote about me navigating the music scene as a black woman, speaking to some of my experiences & more generally people who don’t get seen.
Facebook Comments