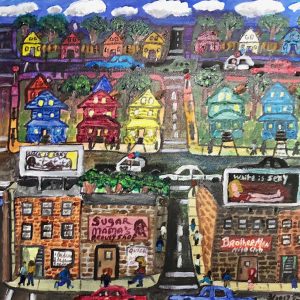 Best of Cleveland lists always include the Orchestra, the sports teams, the Metroparks, and the Westside Market. They should also include the painter Michelangelo Lovelace. No cultural institution has kept its eye so relentlessly focused on our home town, its neglected neighborhoods and its citizens. In acrylic on canvas, Lovelace shows the streets of our often troubled inner city and the rich lives that are lived on them. Like a parent, he has a deep unbreakable love for his birthplace. And, like a parent he can be its harshest critic and most loyal champion.

While his paintings are a joyous celebration of black urban life, they have a clear-eyed awareness of the forces of institutional racism that aim to keep his people down. Lovelace won the 2015 Cleveland Arts Prize (mid-career, visual arts). He made his New York debut in the spring of 2018 at Fort Gansevoort Gallery with a show called The Land. It was a literally unprecedented success. They sold every painting they had. Jill Steinhauer wrote in the New York Times that Michelangelo “… has a distinctive ability to dramatize the intractable social forces that threaten to drown us.”

These seven recent paintings from 2017 have never been shown publicly until now. They are a must see for anyone who loves The Land.