10 contestants… Who will be the Haiku Master? 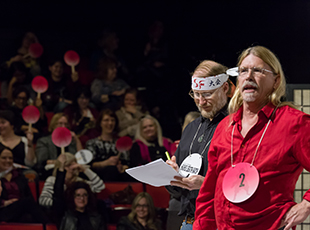 Heights Arts is once again hosting the fun, funny, irreverent Haiku Death Match, and currently seek contestants for the 2018 benefit.  This ever-popular event, with the Haiku Master chosen by the audience, will take place at Ensemble Theater, Saturday, April 21 at 7 pm.

Only 10 competitors will be chosen (first come, first served) to hurl their deadly word weapons against each other in themed rounds. Last year’s event was a sellout and many poems were broadcast on WCLV (a Death Match sponsor). The audience decides the winner, it’s every poet for him or herself, and you could take home the tacky trophy! Come on! Be the first to throw your hachimaki in the ring!

If you wish to compete, and can firmly commit to the date of the Haiku Death Match (April 21), please complete the online poet entry form below as soon as possible to be one of the chosen 10. We will be accepting contestants age 18 and over on a first-come-first-serve basis.  Once chosen, the 10 contestants will be invited to a meeting to review the rules of the competition and the structure of the event.

Tickets for the 6th Annual Haiku Death Match will go on sale to the public in March, 2018.

Proceeds from the Not So Annual Haiku Death Match support Heights Arts literary programs, including the City of Cleveland Heights Poet Laureate, and Ekphrastacy gallery talks