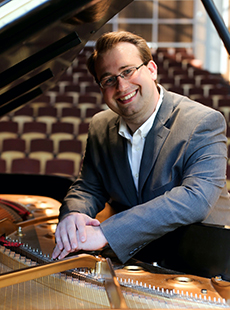 Esteemed Northeast Ohio pianist Andrew Focks will lead a masterclass performance in piano at the Heights Arts gallery. Masterclasses are free and open to the public for observation. Each features students who perform with excellence within various levels, and have been recommended by their teachers.

Northeast Ohio students in grades 6-12 are welcome to apply for all masterclass sessions; applicants must be recommended by their music teacher in addition to the online form below for consideration.

Participating students and one parent (if student is under 18) also receive complimentary tickets to one of Heights Arts’ 2017-2018 Close Encounters chamber music concerts, featuring members of the Cleveland Orchestra (a $30-70 value).

Pianist Andrew Focks has a reputation for astonishing audiences with his electrifying virtuosity and profound lyricism. His award-winning career has taken him across the United States, Europe, and Asia as a solo recitalist, concerto soloist, and chamber musician. Commanding a vast and versatile repertoire, his performances have been broadcast on television and radio in the United States and abroad. From New York’s Carnegie Hall to concert series appearances in Houston, Naples, Boston, and Cleveland, and from concert stages in Chengdu to Salzburg, he continues to garner high acclaim for the depth of his interpretations.

Internationally in demand as a pedagogue, Dr. Focks’ students are frequent prizewinners and scholarship recipients that perform around the globe in major venues including Carnegie Hall, Lincoln Center, Ravinia, the White House, Hollywood Bowl, and Severance Hall. They have also been featured on radio and national television broadcasts in the United States, Europe, and Australia. In addition, his students regularly appear in masterclasses for some of the world’s most distinguished artists, and are accepting into leading university and conservatory music programs. Dr. Focks is a member of the piano and music theory faculty at the prestigious Cleveland Institute of Music Pre-College & Continuing Education Department.

Funding for  master classes and free and discounted tickets is generously provided by the Paul M. Angell Family Foundation.