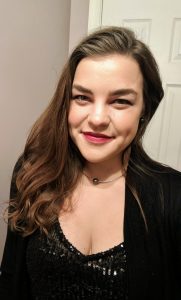 For the month of June 2021, our literary artist of the month is Amanda Stovicek D’Alessandro.

Amanda Stovicek D’Alessandro is a poet made of star stuff. Her work has appeared in 45th parallel, Gordon Square Review, Anti-Heroin Chic, Noble/Gas Qtrly, among others. Her debut micro-chapbook, SPACE SPECTACULAR, was published by Ghost City Press in their 2018 Summer Micro-Chapbook Series.

D’Alessandro has taught for eight years, leading creative writing workshops in the community, and teaching college English. She holds an MFA in Poetry and Creative Writing from the Northeast Ohio MFA Program, and an MA in English Language and Literature from Kent State. D’Alessandro’s poem “Last Note Slipped Under the Mattress” in Gordon Square Review (published as Amanda Stovicek) was nominated for a Pushcart Prize in 2018. Her poem “Blueshift” was selected as the winner of the 2017 Academy of American Poets University Prize. She was named the Graduate Fellow for the Wick Poetry Center for the 2015-2016 and 2016-2017 academic years.

D’Alessandro lives in Cleveland, Ohio, with her husband, her son, and her dog. You can find her on Twitter and Instagram @poetamsd or online at poetamsd.wordpress.com.