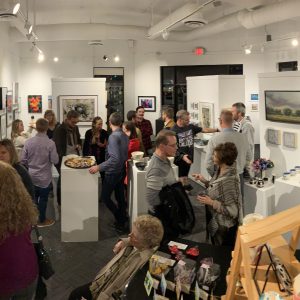 Are you looking for ways to increase your exposure and grow your business?  Heights Arts invites you to join us in our beautiful gallery as we host an open house and networking event for local business leaders.  Meet other members of the local community at Heights Arts as we facilitate an opportunity to share ideas, problems, […]

Jamey’s illustrations have appeared in The New York Times, San Francisco Chronicle, and in several award winning children’s books, including Gordon Parks How the Photographer Captured Black and White America, winner of the NAACP Image Award for children’s literature. His new book, Up in the Leaves The True Story of the Central Park Treehouses, by Shira Boss, […]

Jennifer earned a BFA from Kent State University in Graphic Design and Illustration in 1988. She started a graphic design business creating books, annual reports, and other printed materials for Cleveland area businesses and non-profits. She published illustrations in the Plain Dealer and Northern Ohio Live magazine on an ongoing basis in addition to corporate and childrens […]

Kate Snow is a painter and printmaker born in Charlotte, North Carolina. After five years working and learning at the cooperative art space, Zygote Press, she began actively showing work in 2016. Her stripped down approach relies heavily on elements of design, such as line, shape and pattern, to explore themes around natural and imposed […]

S. Jordan Fine is an artist living and working in Cleveland, OH. Pattern is the impetus for the majority of her work. Employing glass as the primary medium, this body of work is comprised of visual patterns through repetitive shapes, images, and color relationships to create unique one of a kind statement pieces.

After 35 years as a physical therapist, Betsy Fallon began working full-time as a glass artist in 1997. She creates one of a kind jewelry and functional objects using her own handmade beads, silver, pearls and semi-precious stones. Fallon is fascinated with the glass process: the ability to alter the material through the use of […]

We are working on a program for you, our community partners, to provide a special holiday shopping evening at Heights Arts! It’s a win-win proposition! We will extend our discount for store purchases to your members, clients, or shoppers in exchange for your support in promoting the event and helping us with the food cost. […]

Monday Dec. 3, 6–8 p.m. Medical Mutual invites their employees to an evening celebrating the diverse arts in Northeast Ohio. Medical Mutual employees can show ID badges upon arrival to join us in a celebration of the arts and enjoy a 10% discount on any items purchased at Heights Arts that evening! Guest Artists for […]