Once and Future Poet Laureate 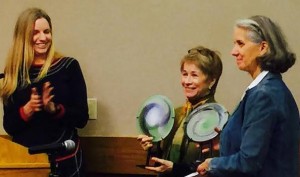 In April 2005, I was surprised and delighted to be chosen by HeightsArts as the first Poet Laureate of Cleveland Heights. In January 2015, the Poet Laureate panel at Heights Arts invited me to fill the post again. I was just as delighted and almost as surprised.

A lot has changed since 2005. HeightsArts has a new director and a bigger staff; the HeightsArts gallery has undergone a renovation and expansion; and five poets laureate have put their personal stamp on the post. Most recently Kathleen Cerveny, has created – Ekphrastacy — a signature HeightsArts program that marries visual art and poetry.

The post of Cleveland Heights Poet Laureate is not a political one. The poet laureate is chosen by and works with HeightsArts, an independent non-profit arts organization. However, because the mayor and members of city council have always supported Cleveland Heights as a Home for the Arts in general and the poet laureate-ship in particular, it’s become a tradition for the outgoing and incoming poets laureate to read a poem each at the first Monday night city council meeting in April.

On Monday, April 6, Outgoing Cleveland Heights Poet Laureate Kathleen Cerveny, read “Song of the Builders” by Mary Oliver, from her book, Why I Wake Early (2004). “It’s a poem about service,” said Kathleen, noting the public service work done by all members of council. The poem ends:

Let us hope
it will always be like this,
each of us going on
in our inexplicable ways
building the universe.

Here is the poem I wrote for the occasion and read:

What Kind of City is This?

It is a city like any other
with parades and meetings,
good and evil, high school plays,
fire escapes, fires, movies, liars,
and the false rain of lawn sprinklers.
Bells and whistles, potholes,
migrating birds, trash, and feral cats.
Snow falling past streetlights,
books waiting to be read,
salt-washed sidewalks, trees rustling
in and out of their clothes.
Children attempting flight.

It is a city like no other.
You like to drive around
and remember its many lives.
The building where you rented
before you bought a house —
the Dori-Lee, apartment six.
This park is where you met X
and later, Y, come to think of it.
You used to walk to the movies
all the time when that building
on the corner was a movie theater.

Once a row of trees on your street
was cut down for no reason.
Everybody was outraged
and grieved the trees for months.
Then new trees were planted
and now, unless you’d lived here
a long time, you’d never know.