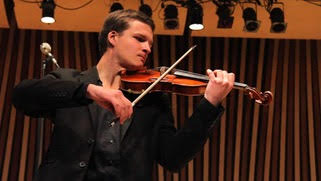 For the month of February, our musical artist of the month is Victor Beyens.

One of Northeast Ohio’s most versatile violinists, Victor Beyens is currently the concertmaster of the Mansfield Symphony as well as assistant concertmaster of the Firelands symphony and assistant principal second of the Cleveland Pops orchestra.
Victor is an active member and one of the primary musical/pops arrangers for Opus 216, an eclectic group of musicians who perform a variety of repertoire and genres in the Cleveland area for a multitude of public and private events. He also performs many house concerts and private events with M.U.S.i.C. (Musical Upcoming Stars in the Classics), with whom he also serves as a board member.

Victor has recently performed a variety of concerti as a soloist with the Mansfield Symphony, Chagrin Falls studio orchestra, National Repertory Orchestra, Cleveland Institute of Music Orchestra. He has also performed in the violin sections of the Phoenix Symphony, the Cleveland Orchestra, the Atlanta Symphony, Erie Philarmonic, and several others. While finishing school, he was the concertmaster (as well as principal second) of the National Repertory Orchestra and of the Cleveland Institute of Music orchestra. Victor has worked with Cleveland based new music ensemble Ars Futura to perform and record music by contemporary composers. Victor is the director of the Rainbow Strings Suzuki program at Chambers elementary school in East Cleveland, where he oversees the violin upbringing of over 25 inner city kids.

Victor’s ability to create and arrange repertoire of all genres, specifically pop and rock music, has led him to collaborations with members of Led Zeppelin, The Who, The Beach Boys, the Cleveland Cavaliers, as well as Andrea Boccelli, Eric Bergen, Connor Bogart O’Brien, Mark O’Connor, and many other local and national acts. His arrangements of works by Edith Piaf, Mark O’Connor, Queen, Bob Dylan, Stephane Grappelli, Bernstein (west side story), Irvin Berlin, The Beatles, Elvis Presley, and others, have been performed and enthusiastically received in several states.

Originally from France, Victor first moved to Phoenix to study with Dr. Katy McLin, and then relocated to Cleveland to further his studies at the Cleveland Institute of Music under the tutelage of David Updegraff and William Preucil. He plays on a fine violin from Chicago made by Carl Becker in 1949 and a W.E Hills and Sons English bow made in 1920. For more media and upcoming concert info please visit: instagram.com/victorbeyens