Since becoming the Cleveland Heights Poet Laureate in April 2015, I’ve found literature thriving in a wide variety of places – some of them surprising. Here’s a look back at my year of living in poetry            – Meredith Holmes

April 2 –Ekphrastacy for Heights Arts “Impermanence” gallery show. This exhibit of pairs of photographs of Cleveland places, taken decades apart was fascinating. Time and place are the stuff of poetry. “Then and now” photos of the Flats, the Cleveland Museum of Art, Terminal Tower, and Coventry Road inspired six poets to write about childhood, the Vietnam War, Cleveland’s robber barons, neighborhoods lost to gentrification, and landmarks that remain miraculously endure.

April 12 – Favorite Poem Project at the Lee Road Library. At this annual public celebration of poetry, all are invited to read their favorite poem. This being Cleveland Heights, many people read poems that spoke eloquently about social justice. I read “the Future” by Philip Levine, 2011 U.S. Poet Laureate. To find out more about him, go to www.poetryfoundation.org.

May 21 – Ekphrastacy for Heights Arts “Syncope” gallery show. Four poets, two of whom are also science fiction writers, responded to the subdued, abstract photos and drawing in the exhibit with evocative, dreamlike poems about dreamscapes, light and dark, shadow and shape. 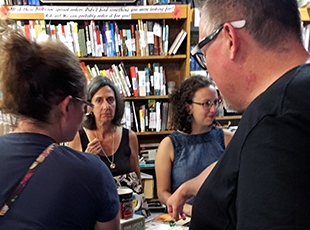 July 13 –Release of Harper Lee’s lost manuscript, Go Set a Watchman, a sequel (although written first) to the beloved To Kill a Mockingbird. Suzanne DeGaetano of Mac’s Backs organized a festive midnight release party at the bookstore. Mockingbird fans were treated to a documentary film about Harper Lee, Tequila Mockingbird drinks, Miss Maudie’s layer cake, and Calprunia’s lemonade. And of course, while waiting for midnight, we all enjoyed the finest in book browsing. Mac’s is a favorite venue for poets and writers to present their work. Go to www.macsbacks to see who’s scheduled next. 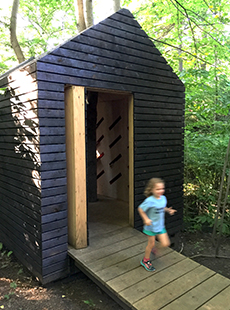 July 21 – “Branch Out” at the Cleveland Botanical Garden was a celebration of trees and architect-designed tree houses. I was delighted to find, among the fanciful structures scattered throughout the Woodland Garden, one called Poetry House. It had lots of irregularly shaped windows for gazing at forest and sky and was equipped with paper and pencils to encourage visitors to write. Most of the tree houses have been taken down, but Poetry House will be a permanent feature of the Woodland Garden.

August 1 – Cleveland INKubator. Billed as a literary unconference, the INKubator was a free, one-day gathering of writers, readers, booksellers, and arts organizations at the downtown Cleveland Public Library. Heights Arts hosted a table, and Kris Platko and I talked up Ekphrastacy and the Haiku Death Match and hawked my second book of poems, Familiar at First, Then Strange. The INKubator was also the launch of LitCleveland, a new literary organization for writers and readers that offers classes, free workshops, and other literary events. To learn more, go to www.litcleveland.org. 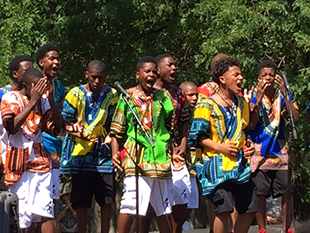 August 2 –Distinguished Gentlemen of the Spoken Word. I’ve heard a lot about these talented young men, and finally got to hear them at the One World Festival held at the Cleveland Cultural Gardens. Their renditions of Walt Whitman, Langston Hughes, and Martin Luther King brought the  written word powerfully to life. The Gentlemen have a loyal following that cares deeply about poetry; audience members spoke and sang the words along with the performers. To learn more, go to www.thedistinguishedgentlemenofspokenword.com.

The Gentlemen will be performing at The Singers’ Club of Cleveland on March 12, 2016. At this spring concert, “A Whitman Sampler,” the chorus will sing pieces inspired by American poetry. To learn more, and to find out about the poetry contest The Singer’s Club is sponsoring, go to www.singersclub.org. 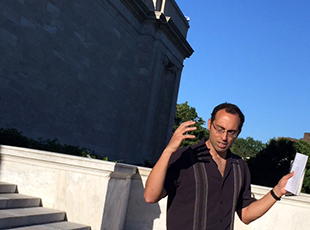 August 21– Phil Metres at the Cleveland Museum of Art. I went to hear poet and professor Phil Metres read from his chapbook of ekphrastic poems, Museum Pieces, at a Friday evening Art Bites. Dr. Metres led a small group around the museum, stopping to read poems inspired by particular pieces.  We began inside with “Stargazer,” (“What is most ancient / is most translucent ”) and ended outside facing the lagoon, standing next to “The Thinker” (“I trace the contours of detonation / tongues of flame still lapping the thinker’s feet”). Dr. Metres directs the Young Writers Workshop, a summer creative writing camp for young people. To learn more about the 2016 session, search, Young Writers Workshop, John Carroll University.

October 1 – Ekphrastacy for Heights Arts “Emergent 2015.” Young poets from the Northeast Ohio Masters in Fine Arts, Creative Writing program and from John Carroll University responded to work by emerging artists trained in northeast Ohio. The result was a stunningly original and authentic reading. One of the poets had been writing seriously for only a year.

October 10 – Haiku Death Match. This competition, in which poets vie for audience approval of graceful, meditative, 17-syllable poems, drew an enthusiastic audience and will be an annual Heights Arts event. Marc Zeale, a relative unknown, won the 2015 trophy. So start composing your Haiku now. You could be the next Haiku Death Match Master.

Haiku Death Match: Slugging it out in 17 Syllables 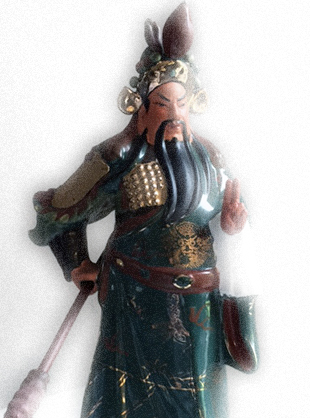 This Saturday night, October 10, at exactly 7 p.m. the 2015 Haiku Death Match will commence inside Dobama Theater.  Eleven of Northeast Ohio’s best Haiku poets will vie for the title of Haiku Death Match Champion. Pairs of poets will face off, reading their best haiku poems. The audience votes for the best poem in each round, and the poet with the highest score wins.

But wait — 11 is an odd number. “In the case of an odd number of competitors,” the Haiku Death Match rule book says, “the current poet laureate must step in and compete.”  So I will be up there with the most toned Haiku poets in the region. I have a small arsenal of poems, but I am worried about who I’m up against.

At least I’m doing my worrying in 17 syllables:

McNiece will get me

with something locally sourced.

I dread that moment.

Completely above my pay grade:

Up on the roof with Cleveland’s creative community 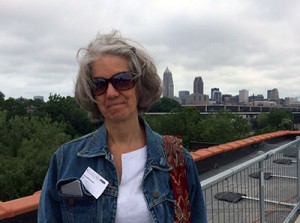 I did not expect, when I became Cleveland Heights Poet Laureate that I would end up in high places. On May 7, I read poems at the Bluegrass in the Fields concert, which was held in a magnificent downtown penthouse apartment. Then on June 19, I found myself on the roof of the Fairmont Creamery in Tremont to hear RA Washington, a Cleveland writer and community organizer, talk at a CreativeMornings Cleveland event.

CreativeMornings is a global breakfast lecture organization with chapters in 117 cities worldwide. The presentations are free of charge and held at 8:30 a.m. on the third Friday of every month. The same subject is discussed in all 117 chapters all over the world. CreativeMornings Cleveland was launched in January 2015. Hosts have included MOCA, Spaces, and the Cleveland Public Library.  (To find out more, go to CreativeMornings.com).

The topic on this breezy, cloudy day high atop the Fairmont Creamery was revolution. Yes, revolution.  Something I have not heard mentioned since 1980, when we started talking about devolution. Of course, we’re always hearing about “revolutionary” new products that will change our lives, but that’s marketing and advertising. The kind of revolution where we – that is, “we the people,” — make change instead of being affected by it — that kind of revolution hasn’t gotten much air play lately.

I wondered, as I sipped my free cup of Phoenix coffee and looked over Tremont to the Cleveland skyline, wouldn’t a discussion about revolution be a little risky in Moscow or Tabriz or Jakarta? These cities are among the 117 where there are active CreativeMornings chapters. 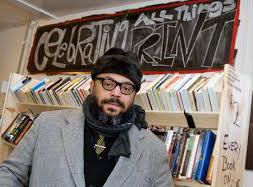 RA Washington’s take on revolution was “Personal Politics, Identity, and Grassroots Organizing in Post Riot Cities.”  “The first thing he told us was that the next day — June 20 – was Tamir Rice’s 13th birthday.  He urged us all to take part in a community remembrance being held at the Cudell Recreation Center. Then he observed how few black people there were in the audience of 50 to 60 people, which led right into his concept of revolution. It’s not Che Guevara leading a guerilla insurgency, and it has nothing to do with advertising slogans. RA Washington’s kind of revolution has its roots in conversation.

He thinks that listening – really listening  — and talking to each other is the only way we the people will achieve a fundamental, 360-degree change in the way we think about and relate to each other. This is neither as simple or as easy as it might sound. We are set in our ways, a lot of us are afraid, and Cleveland has been a segregated city for a long time. He suggested we pretend we’re outsiders, and told about coming from El Paso, Texas to Cleveland about 20 years ago.  He didn’t know there were places he wasn’t supposed to go, music he wasn’t supposed to like, and people he wasn’t supposed to talk to.  So he went where he want to, listened to music he liked, and talked to people who interested him.  He crossed boundaries, which he now realizes, was revolutionary.

He pointed out that in Cleveland, as in other post-riot (the urban rebellions of the late 1960s) cities, most re-development plans for the affected neighborhoods have not worked because nobody asked the neighborhood residents what they needed. “And digital empathy is not enough,” he said.  Digital media are good organizing tools, but exchanging views with your Face book friends is not action. “There is no substitute for face-to-face interaction. Only real, on-the-ground conversation will make change,” he said.

When a young woman in the audience asked Washington how to get started, he was ready with an idea.  He said, “Watch my Facebook page. I’ll announce a Karamu Theater play that everyone here will go to. Karamu Theater is turning 100 this year. We’ll take this opportunity to talk to each other.”

This isn’t everything RA Washington said, but it’s the gist of it. Visit his bookstore, Guide to Kulchur, Text, Art and News at 1386 West 65th street in Cleveland. It’s more than a bookstore. It’s a hub, a place to think, talk, write, read, and make.  RA is the big, African American guy behind the counter. You can’t miss him.