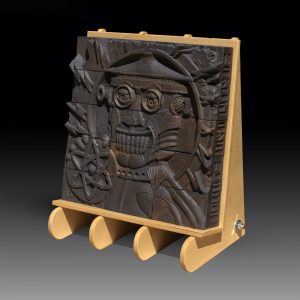 The Rust Belt refers to an area of states near the Great Lakes that grew to prominence in the late 1800s as the country’s “industrial heartland” but which has experienced a decrease of manufacturing and heavy industry dating to the middle of the 1950s, as that original infrastructure aged and corporations moved their production first to southern states in the US, then to other countries, following cheap land and cheap labor. In cities like Cleveland, Detroit, Youngstown, and Pittsburgh, abandoned factories and machinery were left to rust, and many jobs were lost. Because we had the lakes, canals, rivers, and railroads for shipping, this region had been perfectly located for success.  But things changed.  Yet, as we all know here, Cleveland is tough. Our artists, a resourceful lot, have embraced the situation.

Many artists use metal refuse and scrap, resourced wood, found objects, used clothing as the material for their work, both because it is ecological and often cheaper than new materials.  It also has a certain patina and personality because of its history.  Some artists use the history and social context of the Rust Belt as inspiration for their work. Many photographers see beauty in the rust and years of built-up grime that coats the old bridges and stonework, and painters and printmakers mine the same resource for their own production. Ceramicists and glassmakers carry on the region’s long traditions in these media to create work that continues to inspire.

This exhibition embodies an esthetic of reuse and reclamation that celebrates the Rust Belt’s layers of character—the muscularity, the refinement, the resilience, the patina of age, and the energy of reinvention. – Sharon Grossman

You can purchase some items from this exhibition online HERE.